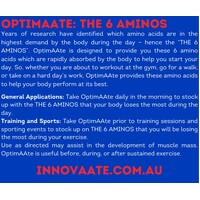 Notify me when back in stock

Please tick this box to proceed.

OptimAAte™ represents a new generation of amino acid supplements specially formulated to replenish a select group of six amino acids, which have been shown by scientific research to be in highest demand during daily exertion and recovery.

OptimAAte is designed to deliver only the six amino acids shown to be lost in the greatest abundance in sweat during exertion. The formulation is thus simple and aims to replace these key amino acids in a “free form” for rapid uptake by the body. No digestion is required and OptimAAte can thus be used during and immediately after exercise.

Daily amino acid supplementation with OptimAAte® can supply the key amino acids that are in greatest demand during the day to support active lifestyles.

OptimAAte® can be mixed with water in your drink bottle or cup.

The unique OpitmAAte® formulation has a special blend of amino acids which are pleasant to drink when mixed with water. Transfer one serving of powder mix to water in your drink bottle or cup. Mix well to disperse the components before drinking. OptimAAte®  can provide a very refreshing start to the morning or can be taken take before, during, or after exercise. There is a very mild hint of lemon flavour, thanks to the amino acids – easy to drink.

Flavour and aroma typical of unflavoured and unsweetened amino acids in solution (subtle natural lemon flavour). Colourless and translucent/cloudy when mixed in water. Free from off-odours and foreign material.

Formulated Supplementary Sports Food. OptimAAte is designed to replenish those amino acids that are lost in the highest amounts during daily exertion. This is not a sole source of nutrition and should be used in conjunction with a nutritious diet and an appropriate exercise regime. This product is not suitable for pregnant women or children under 15 years of age. Should only be used under medical or dietetic supervision.

Underpinned by more than 30 years of published research in Amino Acids, biochemistry, metabolism and immunology, InnovAAte is developing scientifically-backed products, such as OptimAAte to help people improve and maintain good health.

Learn More About InnovAAte, the company and its ongoing research

Be The First To Review This Product!

Help other InnovAAte Pty Ltd users shop smarter by writing reviews for products you have purchased. More From This Category

We are committed to ensuring that your privacy is protected. Should we ask you to provide certain information by which you can be identified when using this website, then you can be assured that it will only be used in accordance with this privacy statement.

We may collect the following information:

What we do with the information we gather

We require this information to understand your needs and provide you with a better service, and in particular for the following reasons:

We are committed to ensuring that your information is secure. In order to prevent unauthorised access or disclosure, we have put in place suitable physical, electronic and managerial procedures to safeguard and secure the information we collect online.

A cookie is a small file which asks permission to be placed on your computer's hard drive. Once you agree, the file is added and the cookie helps analyse web traffic or lets you know when you visit a particular site. Cookies allow web applications to respond to you as an individual. The web application can tailor its operations to your needs, likes and dislikes by gathering and remembering information about your preferences.

We use traffic log cookies to identify which pages are being used. This helps us analyse data about webpage traffic and improve our website in order to tailor it to customer needs. We only use this information for statistical analysis purposes and then the data is removed from the system.
Overall, cookies help us provide you with a better website by enabling us to monitor which pages you find useful and which you do not. A cookie in no way gives us access to your computer or any information about you, other than the data you choose to share with us.
You can choose to accept or decline cookies. Most web browsers automatically accept cookies, but you can usually modify your browser setting to decline cookies if you prefer. This may prevent you from taking full advantage of the website.

Links to other websites

Our website may contain links to other websites of interest. However, once you have used these links to leave our site, you should note that we do not have any control over that other website. Therefore, we cannot be responsible for the protection and privacy of any information which you provide whilst visiting such sites and such sites are not governed by this privacy statement. You should exercise caution and look at the privacy statement applicable to the website in question.

You may choose to restrict the collection or use of your personal information in the following ways:

If you believe that any information we are holding on you is incorrect or incomplete, please write to or email us as soon as possible at the above address. We will promptly correct any information found to be incorrect.